Om Tattoos: Every religion has its own symbols to represent the worship of its God and Goddess. Om is the symbol of Lord Shiva OM tattoo is very famous all over the world. Om symbol represents its own meaning it shows -” I exist, I know, I am Blissful“. Om also expresses the source of life.

In recent years, Om tattoos have gained a lot of popularity due to their simplicity and the symbolic meanings they hold. If you’re planning on getting an Om tattoo design, it’s important to know what each symbol means in order to achieve the perfect tattoo that you want.

Om is used by Hinduism and Buddhism, and Om chanting is widely used in meditation and yoga. Om is a unique word that helps to calm the mind. Most of us feel a deep connection with this symbol and then decided to choose an Om tattoo on our body parts, which will be a reminder of our inner peace and harmony.

What does an Om tattoo mean?

Om symbol leads from darkness to light, unreality to reality. The Om symbol is very popular in tattoo art. Om tattoo designs look beautiful when it is done. Om tattoos can be combined with many other tattoo designs which give a better finish to tattoos. Om tattoo can be done with lord Ganesha, Trishul, lotus, and many other designs. Read above for full detail about “OM”.

Where should Om tattoos be placed?

There are many different places where you can place an Om tattoo. The most popular place is on the wrist, as it is a very visible spot. Other popular places include the back of the neck, the top of the foot, and the inside of the bicep. However, really anywhere that you feel comfortable putting it is a good option. Just make sure that you do your research beforehand so that you know what size and placement will work best for you.

Om tattoos can be done on any part of the body, but as it is related to Lord Shiva we should not put this design on our feet. Om tattoo designs are widely available in every size and color. Mainly Om designs can be found with Trishul, Ganesha, elephant, snake, and some traditional prayers and quotes.

Which hand is good for Om tattoo?

People Usually Ask: Can I get the Om symbol tattoo?

Om is a sacred sound and symbol in Hinduism, Buddhism, Jainism, and Sikhism. It is often used as a mantra in meditation. The symbol itself has many meanings but is generally associated with the divine, spiritual realm, and religious wisdom. Because of its deep meaning and connection to spirituality, the Om symbol makes for a great tattoo design. If you are considering getting an Om tattoo, here are some things to keep in mind.

Tips On Getting An Om Tattoo

Tattoos are very much in trending style these days, and the om tattoo is one of the most popular designs around the world. This mystical, circular symbol can be found in many places around the world, from Buddhist temples to designs found in ancient Egyptian relics. In this article, we’ll explore some of the meanings behind this tattoo design and also share some ideas to help you pick an om tattoo design that you’ll love forever.

Om Tattoo Meaning: Discover the Significance of This Popular Tattoo Design When it comes to tattoo designs, few are as popular as the om tattoo. Om is a sacred sound and symbol in Hinduism, Buddhism, and Jainism, and has a wide range of meanings and interpretations. Many people choose to get an om design because of its spiritual significance, but there are also many who simply find the design aesthetically pleasing. In this blog post, we’ll explore some of the different meanings of the om tattoo and take a look at some of the best om tattoo designs out there.

What is Om in Hinduism?

Om is a very popular tattoo design, especially among Hindus. Om is a spiritual sound and peace symbol in Hinduism. It’s used during meditation as a mantra. The word Om is made up of three Sanskrit letters: A, U, and M. These letters represent the three states of consciousness: waking, dreaming, and sleeping. Om also symbolizes the trinity of God in Hinduism: Brahma, Vishnu, and Shiva. The OM symbol is also said to represent the four states of human consciousness: body, mind, intellect, and ego.

The significance of the mantra Om

The word Om is so pure and spiritual icon in Hindu Religion, Buddhism, Jainism, and Sikhism. It is also a popular tattoo design for people of all faiths. The word Om is said to be the sound of the universe, and it is believed to have a powerful spiritual meaning. Some people believe that Om tattoos can help promote peace, love, and understanding. Others believe that the tattoo can represent their connection to the divine or to their personal spirituality. Whatever your reason for choosing an Om tattoo, it is sure to be a beautiful and meaningful design.

Why Om Tattoos are so popular?

There are many reasons why Om tattoos are so popular. For one, they are a great way to show your religious or spiritual beliefs. They can also be very beautiful and artistic and can be customized to fit your own personal style. Additionally, Om tattoos can have a deep meaning and symbolism attached to them, making them even more special.

So here we are with the best of Om Tattoo Designs in our gallery. Hope you all will like these pictures of Om’s tattoo designs.

1. Small watercolor Om on forearms for men looking so beautiful.

Om is a sacred sound and a spiritual icon in Hinduism, Buddhism, Jainism, and Sikhism. It is also a mantra in Hinduism and Buddhism. The meaning of Om varies between religions, but it generally represents the ultimate reality, consciousness, or Atman. In Hinduism, it is used to introduce and conclude religious ceremonies.

2. A simple and unique om tattoo looks great with a buddha face on side rib cage.

The role of colors in an om tattoo design

Colors play an important role in any tattoo design, and this is especially true for om tattoos. The colors you choose will have a big impact on the overall look and feel of your tattoo, so it’s important to choose wisely. Here are some things to keep in mind when choosing colors for your om tattoo. Check out this design shown below which shows the watercolor tattoo effect for om design.

7. 3d small Om with buddha face for the inner arm.

8. Awesome designs for men and women.

9. Tattoo Drawing and stencils ideas for men and women.

10. Simple but unique Om design ideas for the wrist.

The Om tattoo is a popular design that has a variety of meanings and origins. In Sanskrit, Om is a sacred sound and symbol with a deep meaning. Hindus believe that it is the sound of the universe, and it is often used in meditation.

11. Ohm with maa paa design on the upper back.

12. Small and cute Om designs on the side rib.

13. Simple and beautiful Om tattoo design on the finger.

14. Unique Om With Shivlings on the forearms, designed for men and women.

15. Small Om on neck designs for men and women both.

23. Simple and cute Om tattoo designs ideas for the wrist.

27. Simple but very attractive Om tattoo design for an arm.

30. Om with Trishul and third Eye of Lord Shiva in it tattoo designs is very famous design for forearms.

31. Om tattoo with lord shiva portrait in it for biceps. 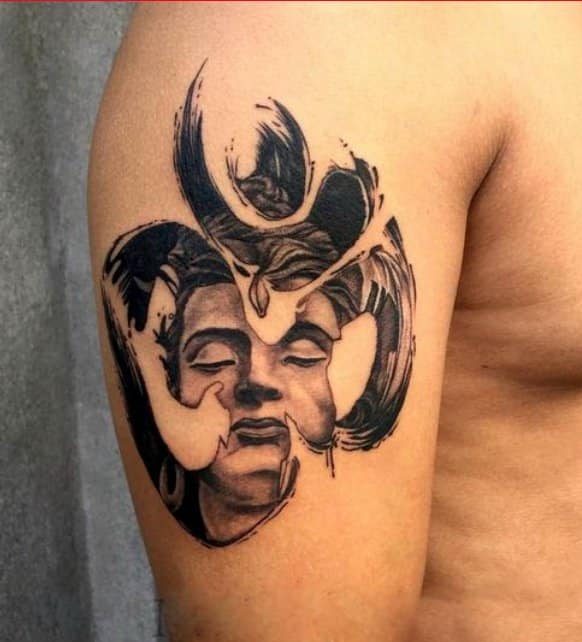 35. Small om tattoos symbolize ideas for the wrist for girls. 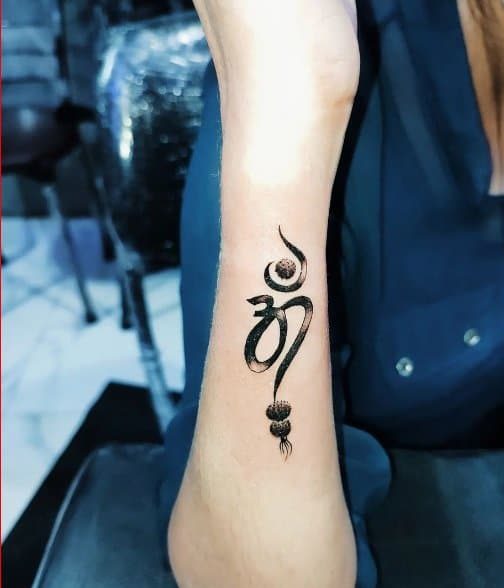 36. Om tattoos designs ideas for neck’s back for women.

37. Awesome lotus and om tattoos ideas for the wrist.

40. Om tattoo designs on the wrist.

41. Ohm tattoos design ideas for the wrist for girls.

The Om symbol is found in a variety of different cultures and religions, each with its own unique meaning. In Hinduism, the Om symbol is seen as a sacred sound that represents the universe. In Buddhism, it is believed to be the first sound ever uttered. For Sikhs, the Om symbol is a reminder of the oneness of God. And in Jainism its represents respect for all living things. Whether you’re looking for a tattoo with religious or spiritual significance, or simply want a cool design, an Om tattoo is a great choice.