Conor McGregor’s Tattoos and Their Meanings

UFC champion Conor McGregor has always seemed to be a man of many tattoos. He’s been spotted with the Irish flag, he has many tattoos on his body, like on his chest, on back, on forearms, on the abdomen, and on leg., he has a mysterious giant gorilla face wearing a crown and eating a heart on the chest.  But now the MMA star is showing off his latest inkings: a spine tattoo –  helix of thorns and tiger. 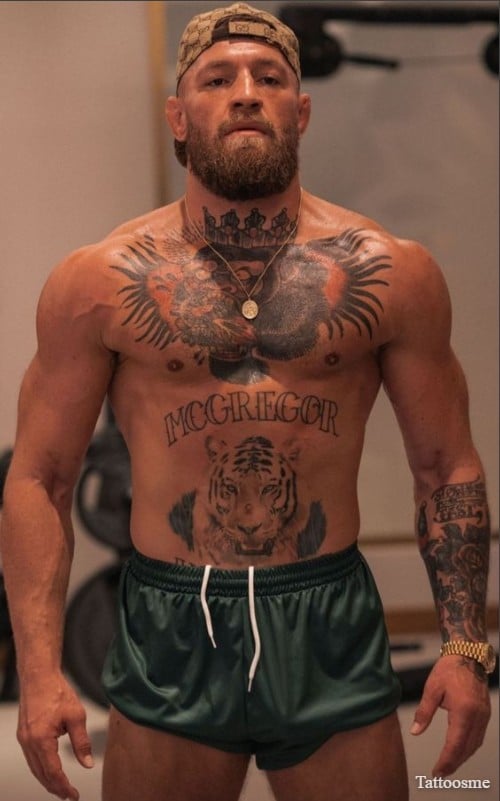 UFC superstar Conor McGregor is known for his flashy style both inside and outside the octagon. A large part of McGregor’s signature look is his extensive body art, but what do all those tattoos mean? In this article, we take a close look at some of McGregor’s most iconic ink and the stories behind them.

Conor McGregor is no stranger to tattoos. The Irish MMA fighter and former UFC champion have a wide array of ink on his body, each with its own special meaning. Here’s a look at some of McGregor’s most notable tattoos and the stories behind them. 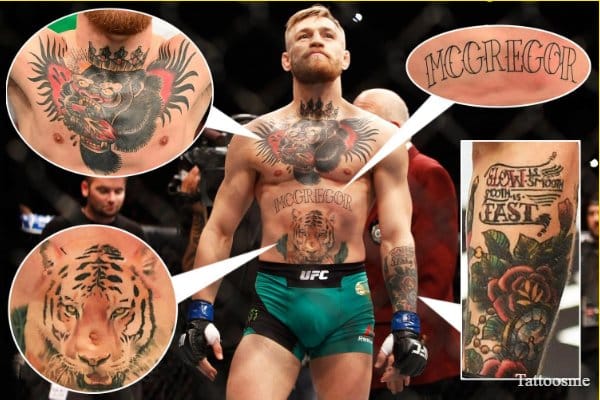 Conor McGregor’s Cross Tattoo: The Celtic Cross on McGregor’s back is one of his most visible and well-known tattoos. It’s a traditional Irish symbol that represents faith, loyalty, and heritage. For McGregor, it’s a reminder of his roots and where he came from.

The words McGregor and Notorious are tattooed on his stomach. 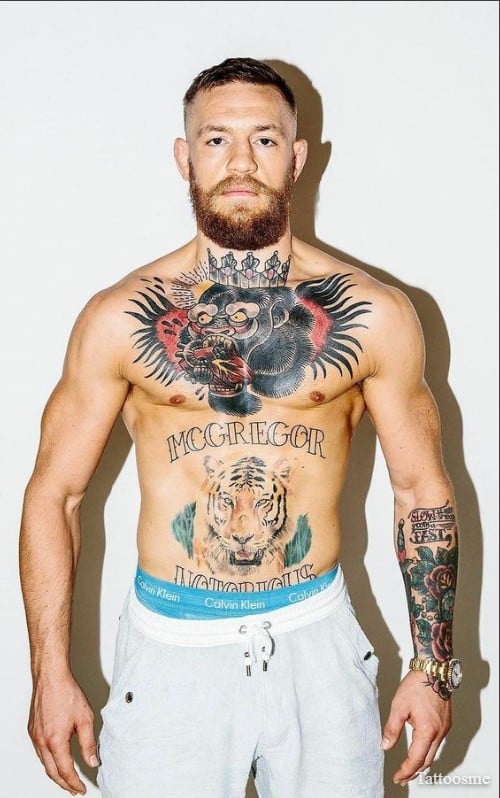 Whether you love or hate him, there’s no denying that Conor McGregor is one of the most talented UFC players.

Other notable Conor McGregor tattoos include a massive tiger on his stomach, which represents strength and courage. Conor’s tattoo of a fearless “Tiger” was inspired by a poem called Invictus. The poem was written by William Ernest Henley, who reportedly wrote it in a single night as he struggled with tuberculosis. In part, it reads: “I am the master of my fate / I am the captain of my soul”. 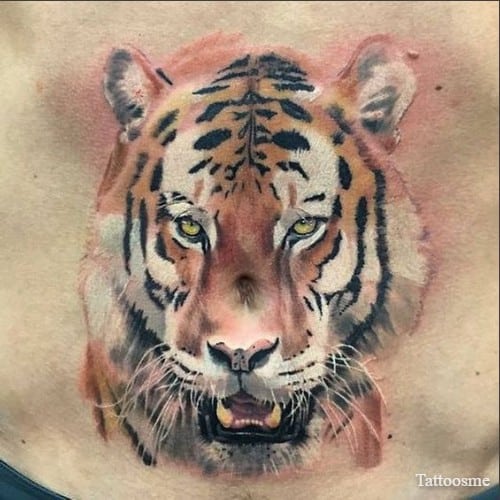 Conor McGregor has several tattoos on his chest, which all have a special meaning to him. McGregor has a silverback gorilla wearing a crown and holding a heart in its mouth. It’s a very unique design and Conor said about this tattoo that he like this tattoo very much as it is. Each animal represents one of his core values: loyalty, fearlessness, bravery, discipline, and humility. All five will carry a special significance to him as he embarks on a journey that takes him from Dublin to Las Vegas. 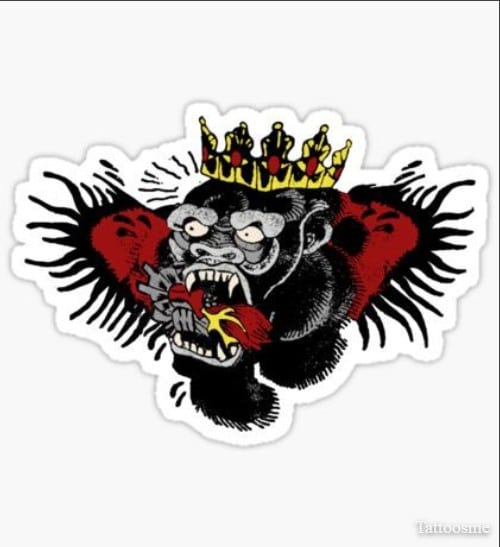 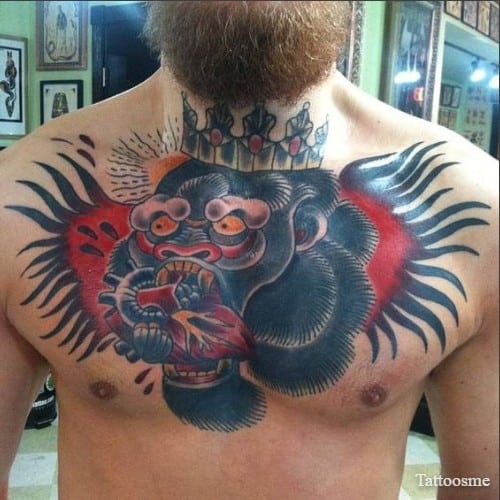 There is a quote tattoo on Conor McGregor’s left forearm that says: “Slow is smooth and smooth is fast. ” with a rose around it.  The back of his forearm features a gentleman with a top hat 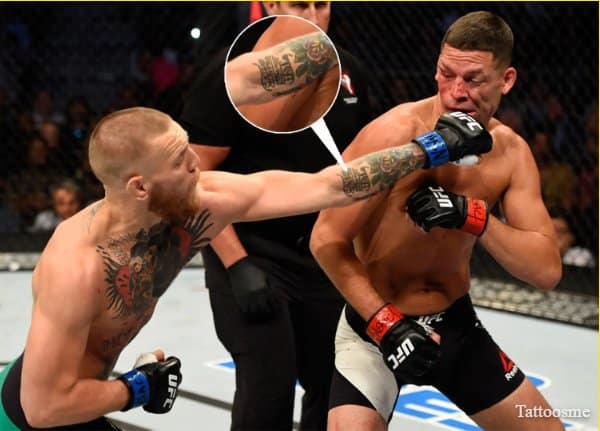 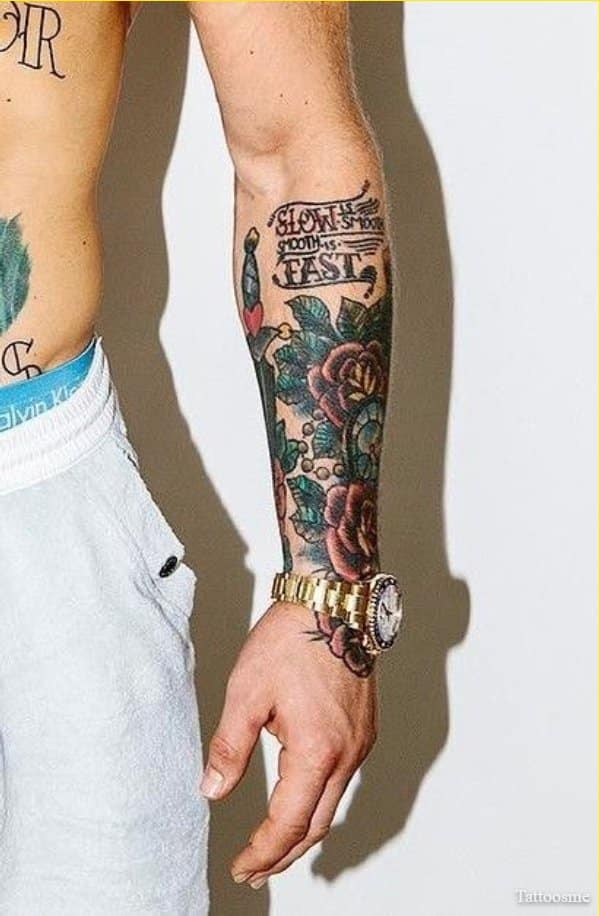 The inside of his forearm has a dagger through one of the roses. 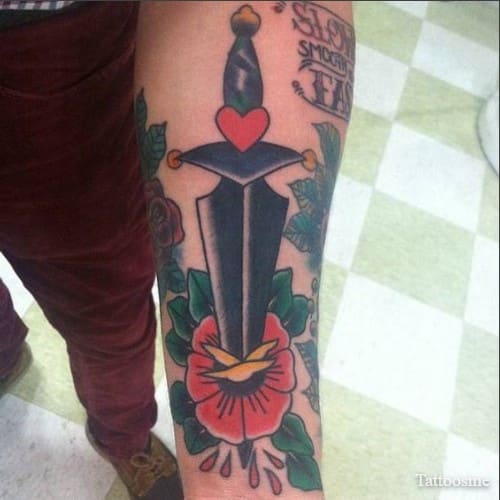 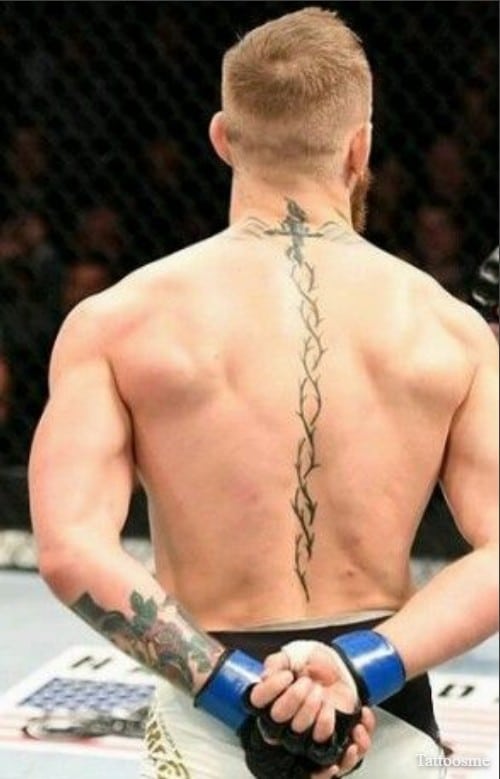 Conor has a helix of thorns running down his spine. Here is a stencil design for his back tattoo for those who want exact same tattoo as Conor’s McGregor back tattoos. 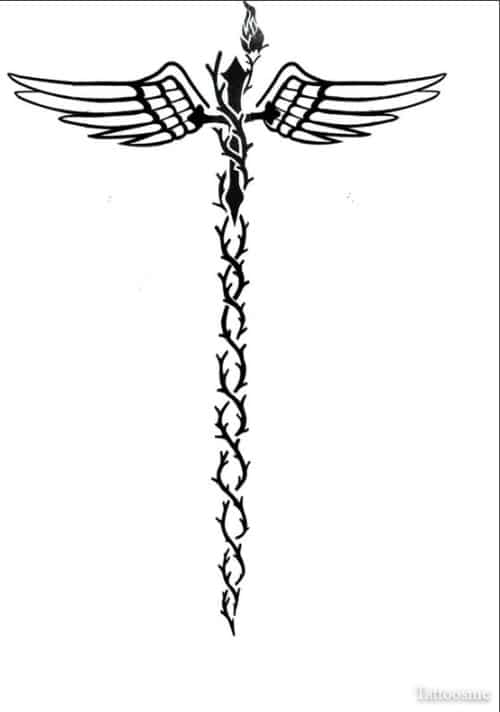 How many Tattoos does Conor McGregor have?

It is reported that Conor McGregor has over 8 tattoos. He has a tattoo of a Celtic cross on his neck back, which is a symbol of his Irish heritage. Other tattoos include a gorilla, a lion, quotes, a dagger, a rose, and Arabic words. The meaning behind some of his tattoos is not known, while others are more obvious, such as the tattoo of his hometown Dublin on his arm.

Conor McGregor’s Arabic tattoo is actually a reference to the Islamic calligraphy style known as Kufic. This type of writing is characterized by its pointed shapes and ornate flourishes, and it was used in manuscripts from the 10th century onward. 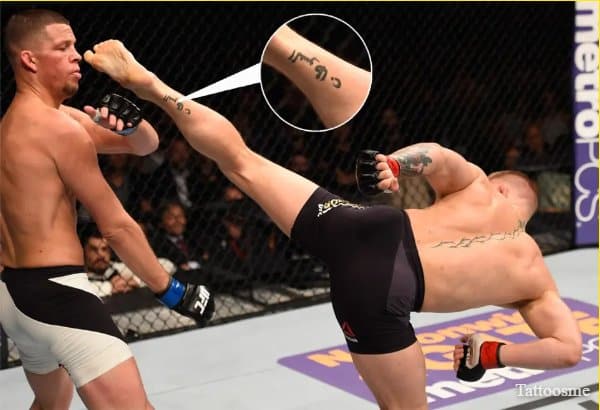 What’s more, McGregor has also previously stated that his tattoos are “slave marks” from when he was held captive as a teenager and forced to work on a sugar plantation in Jamaica. Thus, this particular tattoo may represent connections between violence against minorities and financial gain. Whatever the reasoning behind it may be, it’s an interesting addition to Conor McGregor’s body art portfolio.

There is no one-size-fits-all answer to this question, as the religion Conor McGregor depends on his own personal beliefs. However, some people believe that he may be affiliated with the Celtic faith due to his Irish heritage and love for Gaelic music. Others speculate that he might practice Buddhism or Hinduism based on quotes and behavior characteristic of those religions. As far as McGregor’s personal religious beliefs are concerned, it’s impossible to know for sure.

Which of Conor McGregor’s tattoos is the most impressive?

What is Conor McGregor’s favorite tattoo – Conor McGregor is known for his colorful tattoos, and one of his favorite tattoos is his Gorrila wearing a crown and eating a heart tattoo on his chest which he says represents his strength against his enemy during the UFC fight. He likes this tattoo very much and says that he like this as it is which is a very unique design.

McGregor has also been documented as being fanatical about taking care of his skin, he often wraps it up in bandages to prevent injuries from happening. As a result, it’s likely that the shi hao tattoo plays an important role in this protective process.

As you know that Conor McGregor has a huge fan following in every part of the world.  Here are some portrait tattoos of Conor McGregor. 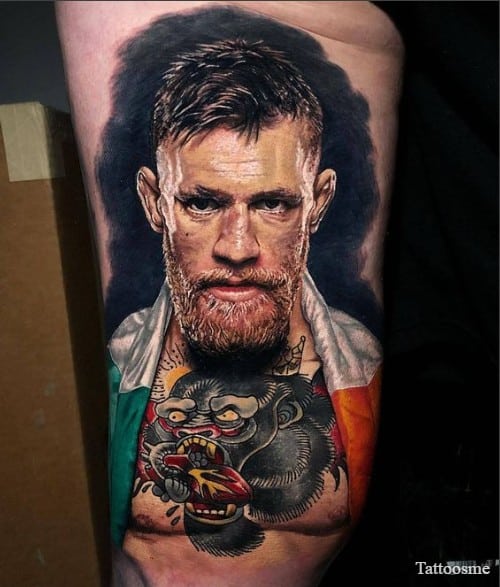 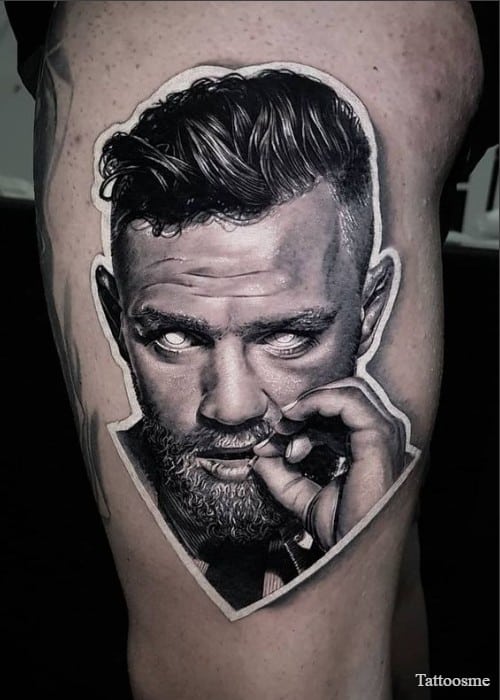 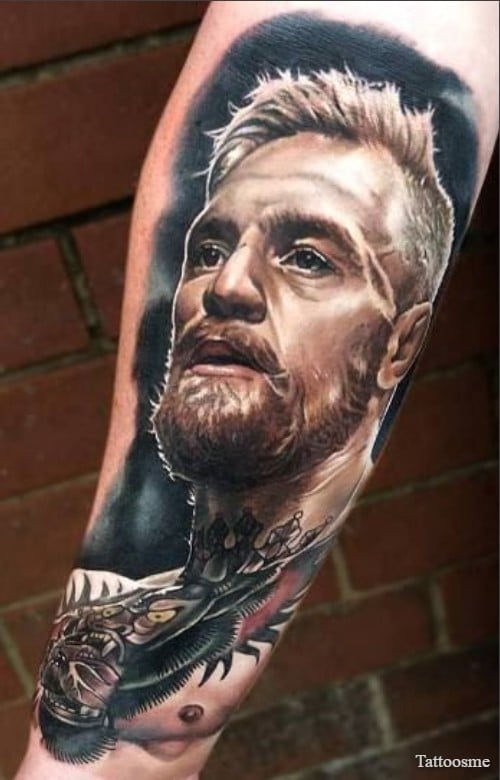